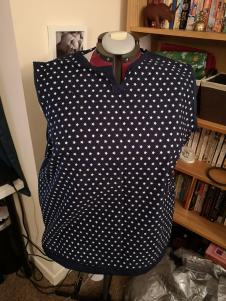 So, this was shelved for Christmas because I had a houseful of people and rather lost any spare energy. Kindly though, my daughter bought me some actual pattern paper which is SO much easier than thick craft paper. I had played with the pattern using calico, but got in a bit of a muddle. So! Starting all over, and being brave (or foolish) and going straight to the real fabric.

So I’ve resized the pattern using this method, and cut out the main parts (but have weirdly lost page 3 of the pattern, which I hadn’t previously cut out so that is odd – not sure what to do about that).

What I hadn’t twigged until I went to follow the instructions is that this uses interfacing. A new thing so alright! I’ve gone down that rabbit hole and so… following some instructions I’m could try using the same fabric to do it, instead of interfacing. What is the worst that can happen, right? Or I can pop to the shop tomorrow… Either way, that isn’t the next step so that is good.

Except here is where I made a massive realisation. Having cut and got to the part where I sewed back to front I noticed this:

So either I go on a hunt for the “right” fabric or we adapt and overcome. I feel like I am making this much harder on myself in every way!

Ok! A quick cup of tea and a think later, I have a plan. I’ll make the one top (the one with the solid stars) since I’ve made the front already with the darts in from that.

That doesn’t work too badly. The neckline seems to assume I have no head to speak of. The arms assume I need to be able to fit my head in there, although I think that is an adjustment of the pattern size, rather than the pattern makers. So I’m looking through websites on how to make bust darts, and I did find this phrase that I found funny (“Press your dart with the point on a curved part of a ham that is similar to the shape of the breast.”) That might just be me though.

I have, at this point, abandoned the pattern almost entirely. Armholes are now smaller, and I’ve sliced in at the sides to give more shape, made a slice in the neck …so instead of following their pattern I’m simply finishing the neckline and shoulders with bias binding from the darker blue fabric.

Overall, quite happy with it. I’m still tempted to put a bit at the back to pull the waist slightly smaller… Nice to know that I can do this a bit more on the fly. Martha wouldn’t be impressed, I think, because it isn’t finished as nicely as the one I did with her but it the first one alone, and mostly without a pattern!